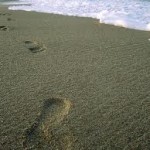 Many centuries ago people used tales to understand and explain the nature,  universe and what ever happened around them. From today’s perspective what we can easily describe as childish stories were called “mitos” or myths in the ancient Greek culture. There used to live the immortal beings on Mount Olympos which is so far away and high that, no mortal can ever reach. The gods of Olympos were held responsible for all the natural or even personal happenings of the world of the mortals. 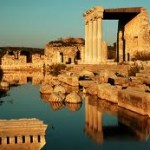 Here let me give some examples; the explanation for heavy sea is Poseidon the god of seas. In case there is thunder and storm, then Zeus the god of gods is furious with something and he sends his spears of anger to the poor humans. Along with such beliefs and “explanations” solar eclipse must have been considered as a strong warning of some heavenly bodies on the mortals. Therefore people of those times had a carefree life, easy to make up new stories or integrate existing ones without necessarily filtering or any reasonability. 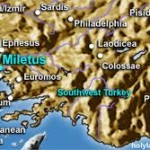 Thales the great mathematician and thinker used to live in Miletus city, which is today on the Western coast of Aegean Sea in Turkey, near the modern town of Söke. Thales was knowledgeable and talented enough to predict and announce the solar eclipse to take place in 585 BC. (*1). However he had great challenges to convince the people scientifically that, this is a natural and even periodical event. It was a lot easier for the people to think in the other way round. It must have been such a “peace” damaging thing to try to think and search for actual explanations. We can give many similar examples. Till not long ago, earthquakes had funny “explanations” in rural and uneducated parts of Asia Minor. Accordingly “the earth is a plate placed on the head of the yellow ox, quake takes place when he shakes a leg”. Who would dare and care for the discipline of geology and concepts like faults, stratum.. 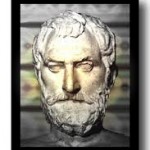 In order for the people who lived in the Aegean about 2600 years ago, to consider what Thales “claimed” for explaining the solar eclipse, they certainly needed to use their own minds and think. They should SERIOUSLY examine the objects in the sky, make calculations, bring out theories. Possible failure could well be a bonus after all. Isn’t it easier to make up another story? One of the divine beings warns us, she or he tells us that if we do not behave well our sun can be blocked even for longer times! In any case, there is a common tendency to believe in to such things. This imaginary and non scientific approach offers great advantages to the leaders too. It must have been very likely for any populist leader to say something like, “I can save your sunlight to be further blocked soon, simply follow me!” Those who have been ”lead” are comfortable and happy in their routine lives and the leaders are happy with greater power. Untill someone asks, are all these really true or not?

After several years “Mitos” leaves its place to “Logos” to a much more orderly understanding of the world and science. Together with Thales this is in fact an exciting beginning for the human being, the man made fairy tales are now replaced with the human mind. Right here, I would like to draw your attention that, all around the world, we still use the famous theory of Thales in geometry. It was along Thales that we accept that, human beings start using their own minds. Start asking crucial questions like where do we all come from, what is the essence of all things, what exactly is nature, how different we the humans are from other beings. These questions are extended as can there be any purpose in life (except for eating good food and relaxing well). Who are we, what is existence, what is good what is bad, what is death. There starts an unending journey of inquiry and progress.

Much different than today’s narrow minded multiple choice standard tests, the human beings start developing new theories and make critiques and make further inquiries without necessarily finding concrete answers. It is considered that philosophy started around those years that Thales lived. Then philosophy and science used to be within each other. Just like Thales himself, a mathematician, a thinker, an expert on astronomy, geography, geometry..

The word “philia” in ancient Greek means love, and “sophia” is wisdom (*2). So the combination of these two words “philosophia” means “love of wisdom”.  The Turkish word of “felsefe” has been derived from Arabic translations. “Philosophos” philosopher in English,  (“filozof” in Turkish) means the person who enjoys and loves wisdom, the one who is in search for it. The words philosophia/ philosophos have been first used by the Aegean thinker and mathematician Pythogoras who lived in between 580-500 BC, by the purpose of defining himself (*3).

After about 2600 years, the love of wisdom reaches to the era of information and communication. At the man time many disiplines are accepted to be born from this great love of the human mind.

I am an international education improvement leader specialized with IB Diploma Programme. Pedagogical leader of changes and visionary school administrator. I help schools to introduce, implement and also improve their IB Diploma Programme by consulting, trainings that I offer and with my leadership. My international educational leadership skills are acknowledged by my appointment in the team of IB Diploma authorization visits in Europe, Africa and the Middle Eastern counties and also in Asia Pacific. As an IB recognized Diploma Programme educator, I have participated in the authorization and consultation of many schools all located in various parts of the world. On behalf of the IB organization I prepared reports on DP 5 year evaluation self-studies. I have a genuine interest in broadening the horizons of the young people that we educate and contribute improving the overall quality of the education institutes that I take my part in the admin team. As details can be seen below I keep on attending several professional development programs, including the Principals' Training Center. Many students and teachers with whom I had the chance to work closely with, certainly managed to change their lives for the much better and improved themselves a great deal . I can proudly say that, the same thing applies to the schools that I took part in the leadership teams. With great enthusiasm I teach IB Theory of Knowledge and philosophy. As a world citizen coming from a natural transition area in between the western world and the east, I have acquired a strong intercultural sensitivity. View all posts by Sencer DONMEZ

This site uses Akismet to reduce spam. Learn how your comment data is processed.